Mosaic is an art form dating back to ancient times.  It involves placing small pieces of pebble, stone, shell, tile, glass or other material (called tesserae) together to form a pattern.  The designs may be abstract or representational. Many of the methods and techniques of thousands of years ago are still used today.

Some of the earliest forms of mosaic art date back to the Sumerians around 3,000 BC.  This would be in what was Mesopotamia – around the Euphrates River and modern day Iraq. These early mosaics were used to decorate walls. They would take clay cones and push them into mud walls. The different colors, on the bottom of the cones, were then used to create various patterns. 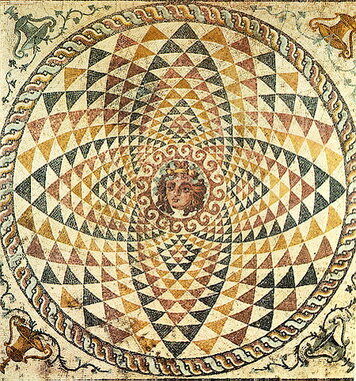 ​By 600 BC the Greeks were producing mosaic floors. They would gather pebbles, smoothed by water, and use the varying shades and shapes to create wonderful geometric patterns. From there they moved to creating more representational mosaics and introducing more colors and shading. They also moved, from only using water smoothed pebbles, to stones and colored glass. Plus they began making the tesserae of more regular size for ease of use. Around the third century BC the Greek mosaic artists began doing more figural work. With mythological subjects or hunting and other scenes depicting pursuits of the wealthy were common. 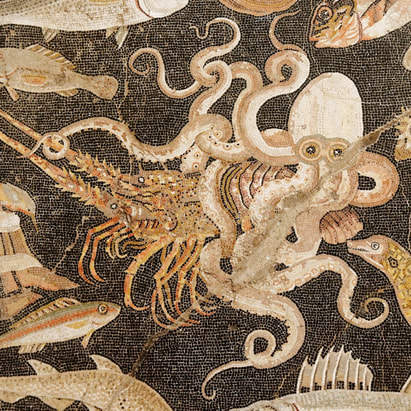 ​Mosaic art continued to flourish in Roman times. There are many sites in Europe today that still have examples of mosaic floors from Roman times. This is a testament to the durability of the material and the art. Romans also used decorative mosaics for walls, fountains and more. Smaller tesserae, more colors and more shades were also introduced during this period. The Romans continued with the same general design and subject matter of the Greeks. They did some basic figural work but it wasn’t until the rise of Christianity that figural wall mosaics really became popular. During this time there were 2 basic methods of creating mosaics. The first, opus vermiculatum, used small tesserae, usually cubes of 4mm or less, and were produced in workshops, glued lightly to a temporary surface and then transported to the site and installed. This form allowed for greater detail in the mosaic and resulted in a more “painterly” final product. The more common method, opus tessellatum, used larger tesserae and would be laid on site. 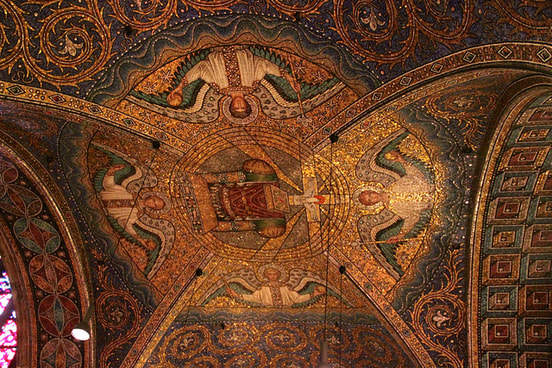 ​With the rise of Christianity there was an explosion in mosaic art. Christians adapted the wall and ceiling mosaic forms for use in churches. Many of their images were representative style and mostly of a religious theme. They would often use expensive materials, such as gold and gems, to inspire their worshippers. Many of these mosaics are still in existence and viewable by the public in European churches. During the Renaissance mosaics, as an art form waned when painting became a more popular art form. 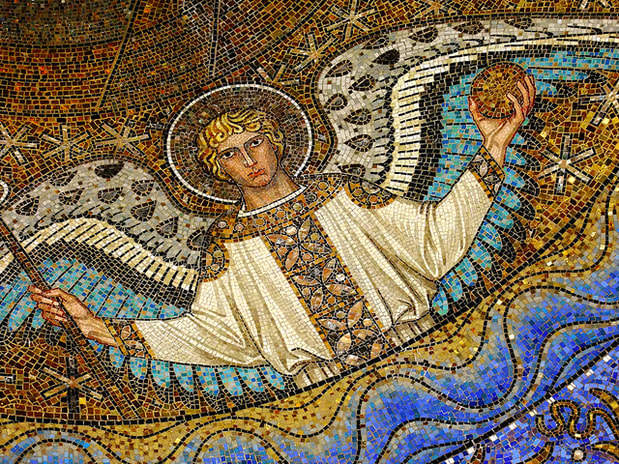 ​This photo of incredible mosaic art in the Palatine Chapel shows a beautiful example of mosaics in the early Christian church.  This chapel is what is left of Charlemagne's Palace in Aachen, Germany. The palace itself is gone, but the chapel was saved and has been incorporated into Aachen Cathedral.

Mosaics are not only found in Europe. They are in North Africa, the Middle East and Latin America. In the Middle East they are found in both the Jewish and Muslim cultures. Jewish synagogues were decorated with classical floor mosaics. They used geometric patterns, biblical scenes and other images. Mosaics have been uncovered dating back to the 5th & 6th centuries. In South Arabia sites have been found with mosaic work dating back to the 3rd century.   Their mosaics were of incredible geometric patterns and shading. They were used on floors, walls and on furniture. Mosaics have also been found in several Latin America cultures. They used turquoise, other stones and precious metals.

In the 1700”s micro mosaics became popular. These were small pictures using very small pieces of tesserae. They usually depicted scenes in Europe, were very detailed and contained several thousand tesserae per square inch. In the 1800’s the Indirect Method of creating a mosaic was developed. Tesserae are applied face-down to a backing paper using an adhesive. This is done in the studio, and then the completed piece is transported to the installation site. Here it is adhered to the final site and the backing paper is removed from the face.

Today mosaics are still a popular art form. They are used in kitchen glass tile mosaic backsplashes, craft projects, garden art, as fine art, sculpture, park benches and also in public art. With mosaics you can create beautiful art work that is durable and low maintenance.